In ancient Athens, the philosopher Socrates was followed by a lineage of students, and later teachers, beginning with Plato and Aristotle. In the 16th Century, the Renaissance painter Raphael depicted Plato and Aristotle at the center of his work, The School of Athens. In it, Plato points up to the sky, a reference to the world of the forms, the ideal reality that he thought was fundamental. Aristotle, meanwhile, lowers his hand to the ground, giving a more Earthly account of nature. Millennia later, debates between idealism and naturalism, or variants of them, persist. This short-sleeved dress picks the more lofty side: Team Plato.

More than a T-shirt and long as a dress – hello T-shirt dress! Pure combed and ring-spun cotton makes for great jersey quality. And the set-in neck band and shoulder-to-shoulder tape will keep your new tee dress in shape – also after many a washing. Awesome quality made in the USA! 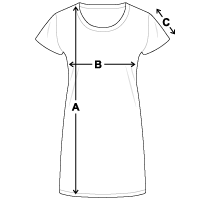